The company was originally incorporated in the 1989 and is headquartered in Broken Arrow, Oklahoma.

CATV: The CATV segment sells new, surplus, and refurbished equipment to cable television operators (also known as multiple system operators or MSOs) or other resellers that sell to these customers.

While most customers are based in North America, Central America, or South America, the company does operate in other geographic regions that rely on the same technology. As noted above, ADDvantage also offers repair services for cable television equipment.

The company carries products used in the delivery of video, telephone, and internet signals from most original equipment manufacturers (OEMs). These include:

Access and Transport Products, which are used to transport signals from the headend to their ultimate destination. These generally consist of transmitters, receivers, line extenders, broadband amplifiers, directional taps, and splitters.

Customer Premise Equipment (CPE) consists of digital converters and modems placed inside the homes of subscribers that receive, record, and transmit video, data, and telephony signals.

Test Equipment, which is used in the set-up, testing, maintenance, and overall support of the cable network.

used for routing voice traffic, and data equipment is used to transport internet and voice over internet protocol traffic.

Customer Premise Equipment refers to integrated access devices, channel banks, and routers placed at the customer site that are used to receive the telecommunications signal from the provider.

As noted above, other services include decommissioning and recycling of obsolete and surplus hardware.

The revenue attributable to each segment and geographic region is detailed in the table below:

To distinguish itself from other resellers, ADDvantage has adopted an on-hand, on-demand business model. This entails carrying a large inventory of products of new and refurbished products that can easily be customized to meet the customer’s needs. Many other resellers cannot do this due to working capital restraints.

Other unique offerings include repair services and the ability to reconfigure new and refurbished equipment.

OEMs generally offer the lowest equipment prices for large orders. However, due to its inventory management, the company holds a competitive advantage over OEM suppliers for smaller orders or items that need to be delivered quickly.

Revenue for the second quarter ended March 31, 2017, increased seven percent year-over-year to $11.3 million. Sales in the CATV segment fell by approximately $1.0 million, but this decrease was offset by the acquisition of Triton Datacom in October 2016 that added revenues to the Telco segment. The gross profit margin was 35 percent for CATV, and 32 percent for Telco.

Earnings before interest, taxes, depreciation, and amortization (EBITDA) decreased 18 percent year-over-year to $0.5 million. This was attributable to declines in both the CATV and Telco segments. Despite an operating loss of $0.2 million for Telco, the company posted positive net income in the second quarter of $10,000. 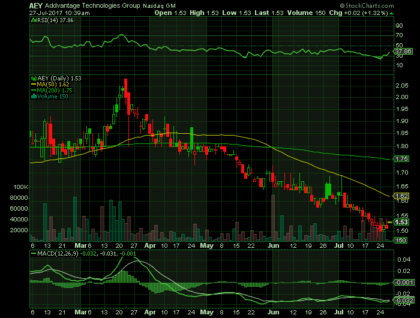 ADDvantage has developed a strong foothold in the competitive telecommunications equipment industry. By holding a large inventory of new and refurbished products, the company can fulfill certain orders more efficiently than other resellers and OEMs. ADDvantage maintains a strong balance sheet and positive operating cash flows. Furthermore, the company trades at a discount to its net current asset value.