Aeterna Zentaris Inc. (NASDAQ: AEZS) is a biopharmaceutical company, engaged in developing and commercializing novel treatments in oncology, endocrinology, and women’s health. The company’s product pipeline includes MACRILEN, which completed Phase III trial for use in the diagnosis of adult growth hormone deficiency. It is also developing an LHRH-disorazol Z conjugate, which is in pre-clinical development in oncology. Aeterna Zentaris Inc. was founded in 1991, is headquartered in Summerville, South Carolina, and registered in Montreal, Canada.

The company reported on July 18, 2017, it was notified by the FDA, that the Company’s New Drug Application (“NDA”) seeking approval of Macrilen™ (macimorelin) for the evaluation of growth hormone deficiency in adults (“AGHD”) has been accepted as a complete response to the FDA’s November 5, 2014 Complete Response Letter and granted a PDUFA date of December 30, 2017.

David A. Dodd, President and Chief Executive Officer of the Company stated, “We are pleased that the FDA has formally accepted our resubmitted NDA and that it is under active review with an end-of-year PDUFA date. We remain confident that the FDA will approve our NDA and, therefore, we are moving forward with our preparations to launch the product in the first quarter of 2018.”

AGHD affects approximately 75,000 adults across the U.S., Canada, and Europe.  Growth hormone not only plays an important role in growth from childhood to adulthood, but also helps promote a hormonally-balanced health status.  AGHD mostly results from damage to the pituitary gland.  It is usually characterized by a reduction in bone mineral density, lean body mass, exercise capacity, and overall quality of life as well as an increase of cardiovascular risks.

Following a comprehensive analysis of the data from the confirmatory trial, the Company concluded as follows:

Macrilen™ has been granted orphan drug designation by the FDA for diagnosis of AGHD.  The Company owns the worldwide rights to this patented compound and has significant patent protection left.  The Company’s U.S. composition of matter patent expires in 2022 and its U.S. utility patent runs through 2027.  The Company proposes, subject to FDA approval, to market macimorelin under the tradename Macrilen™.

The Company currently co-promotes two products: Saizen® [somatropin (rDNA origin) for injection], a recombinant human growth hormone supplement, on behalf of EMD Serono; and, APIFINY®, the first non-PSA blood test for use in evaluating and managing the risk of prostate cancer, on behalf of Armune Bioscience.

The only cancer specific, non-PSA blood test that may aid clinicians in the assessment of risk for the presence of prostate cancer.

Aeterna Zentaris has signed a promotional services agreement with EMD Serono, Inc. Under the terms of the agreement, Aeterna Zentaris details Saizen® to designated medical professionals in specified territories in the United States.

Revenues were $261,000 for the three months ended March 31, 2017, as compared to $242,000 for the same period in 2016. The increase is mainly explained by the amortization of the up-front payment received in connection with one of the out-licensing agreements that were entered into in 2016 for ZoptrexTM.

Recent FDA actions have been a catalyst for AEZS shares, however;

The FDA PDUFA date is forthcoming (December 2017) and there is no guaranteed outcome.

If approved, Macrilen™ will be the only FDA-approved drug for assessing AGHD, granted orphan drug status, Patented through 2027

The company may need to generate significant cash in the future to effectively produce and market Macrilen™.

The prospects for companies operating in the biopharmaceutical industry are uncertain. 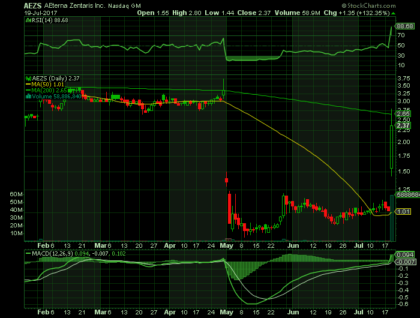 In May 2017, shares of AEZS plummeted after the Phase 3 trial of Zoptrex, a treatment for women with metastatic endometrial cancer, did not meet its primary endpoint of an increase in survival and the company abandoned its clinical trials for the drug. The recent FDA catalyst for Macrilen™ may have put AEZS shares back on track. In May 2017, analysts at both H.C. Wainwright and Maxim Group reiterated their “buy” rating for Aeterna Zentaris shares with high side targets of $11 and $7.50 respectively.