Arsanis, Inc. (NASDAQ: ASNS) is a clinical-stage biopharmaceutical company focused on applying monoclonal antibody (mAb) immunotherapies to address serious infectious diseases. Arsanis possesses a deep understanding of the pathogenesis of infection, paired with access to what Arsanis believes to be some of the most advanced mAb discovery techniques and platforms available today.  Arsanis’ pipeline is comprised of mAbs targeting multiple serious bacterial and viral pathogens, including a respiratory syncytial virus.

Arsanis is a U.S. company headquartered in Waltham, Massachusetts, with a wholly owned subsidiary that is primarily focused on discovery research in Vienna, Austria (Arsanis Biosciences GmbH).

On November 27th, the company’ shares surged followed by the announcement of a definitive merger agreement, under which X4 Pharmaceuticals is expected to merge with a wholly-owned subsidiary of Arsanis in an all-stock transaction. The merger would result in a combined company operating under the X4 Pharmaceuticals name that will focus on the development and commercialization of X4’s lead product candidate, X4P-001, and the advancement of X4’s pipeline of treatments for rare diseases of the immune system and rare cancers.

X4’s assumed value of $115 million is based on the value of its pipeline, the valuation of its last private round, and also X4’s achievement of various milestones since completing that round. 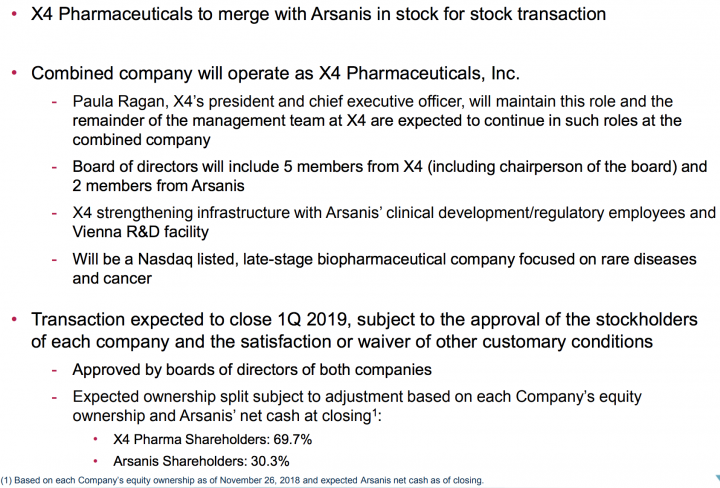 Michael Gray, president and chief executive officer of Arsanis, said, “Following an extensive review of strategic alternatives, we believe the proposed merger with X4 Pharmaceuticals would provide Arsanis stockholders the opportunity to potentially realize value as X4 continues to execute on its promising new approach to rare disease and cancer therapy via the CXCR4 immune pathway.  We are confident that X4’s experienced senior management team will lead the combined company to future success.  We are also pleased that X4 has expressed interest in retaining certain members of our clinical development and regulatory staff as well as our scientific team in Vienna, Austria, a team which has deep expertise in the research of virally-mediated infections, as demonstrated by Arsanis’ on-going ASN500 collaboration with the Bill & Melinda Gates Foundation.”

We will be initiating coverage on a small float, potential breakout trade Tuesday (12/04/18) at 9:30 AM Eeastern. Visit this page at 9:30 AM to read this report as soon as it is issued- https://tradersnewssource.com/traders-news-source-new-members/

Alternatively, join our SMS/text alert service by sending the word “Traders” to “25827” from your cell phone. It’s easy and free for most carriers.

Before this on Nov 9th, Arsanis reported financial results for the third quarter ended September 30, 2018.

Arsanis’s business risk profile derives substantial strength through the series of positive developments in the recent past, which has been steadily encouraging for the company. Analysts tracking the stock believes that the combined entity has a significant opportunity to build a robust global rare disease franchise targeting more than $1 billion in market potential, spearheaded by X4P-001 and WHIM syndrome. Furthermore, the merger is expected to combine the strengths, provide near-term capital to support ongoing trials and further strengthens the overall team and infrastructure of the combined entity.

About X4 Pharmaceuticals: X4 Pharmaceuticals is developing novel therapeutics designed to improve immune cell trafficking to treat rare diseases and cancer. X4’s oral small molecule drug candidates antagonize the CXCR4 pathway, which plays a central role in immune surveillance. X4’s most advanced product candidate, X4P-001, is in Phase 2 clinical trial in patients with WHIM syndrome, a rare genetic, primary immunodeficiency disease, and is currently under investigation in multiple clinical trials in solid tumors. X4P-001 is expected to begin a Phase 3 trial in WHIM syndrome in the first half of 2019. X4 was founded and is led by a team with deep product development and commercialization expertise, including several former members of the Genzyme leadership team, and is located in Cambridge, MA.

Synergies and value unlocking due to the merger: 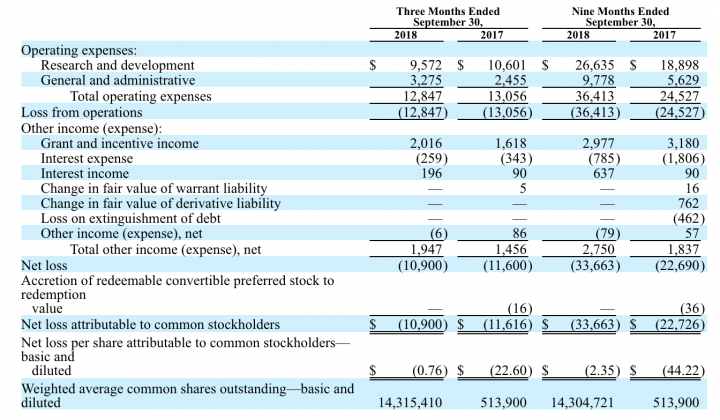 Revenue: To date, Arsanis have not generated any revenue from any sources, including from product sales, and the company does not expect to generate any revenue from the sale of products in the near future.

General and administrative expenses were $3.3 million for the third quarter of 2018, compared to $2.5 million for the third quarter of 2017. The increase of $0.8 million was primarily related to additional costs associated with operating as a public company, including increases of $0.9 million in personnel costs primarily due to an increase in headcount and employee compensation.

Successful completion of the upcoming milestones/Catalysts would lead future direction for the company. Any adversities related to these future milestones might adversely impact the overall investor sentiments.

As with any pre-development stage company, Arsanis has experienced net losses, and negative cash flows from operations since inception and expects these conditions to continue for the foreseeable future. Therefore, to fund operations, it needs to raise money through capital markets and/or private financing.

Arsanis is still an early stage entity and has not yet generated revenue and will likely operate at a loss as it grows its market position and seeks ways to monetize it. The company’ prospects are significantly dependent on its flagship projects, which might have limited sales potential initially. 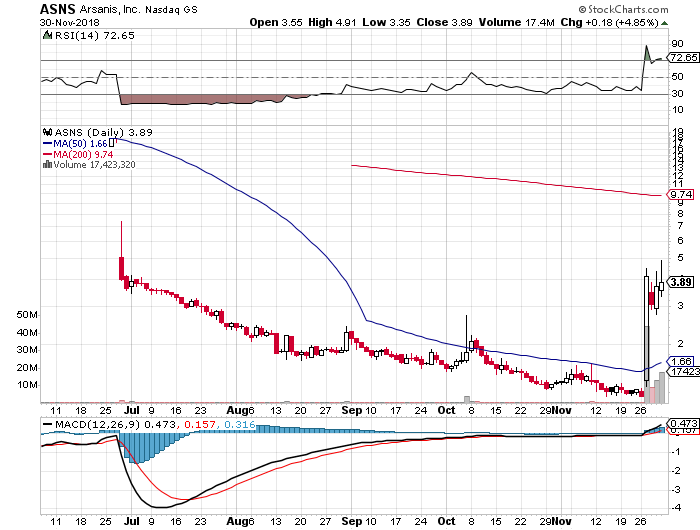 Release of Liability: Through use of this website viewing or using you agree to hold TNS LLC, its operator’s owners and employees harmless and to completely release them from any and all liability due to any and all loss (monetary or otherwise), damage (monetary or otherwise), or injury (monetary or otherwise) that you may incur. The information contained herein is based on sources which we believe to be reliable but is not guaranteed by us as being accurate and does not purport to be a complete statement or summary of the available data. TNS LLC encourages readers and investors to supplement the information in these reports with independent research and other professional advice. All information on featured companies is provided by the companies profiled or is available from public sources and TNS LLC makes no representations, warranties or guarantees as to the accuracy or completeness of the disclosure by the profiled companies. None of the materials or advertisements herein constitute offers or solicitations to purchase or sell securities of the companies profiled herein and any decision to invest in any such company or other financial decisions should not be made based upon the information provide herein. Instead TNS LLC strongly urges you conduct a complete and independent investigation of the respective companies and consideration of all pertinent risks. Readers are advised to review SEC periodic reports: Forms 10-Q, 10K, Form 8-K, insider reports, Forms 3, 4, 5 Schedule 13D.