Avon Products, Inc. (NYSE: AVP) is a global manufacturer of beauty and other related products that has operated for more than 130 years. Unlike many competitors that distribute their products through third-party retailers, Avon sells its products directly to consumers through affiliated sales representatives.

On March 1, 2016, Avon split into two distinct operating entities: the company and New Avon, LLC. Avon is publicly traded and operates and/or distributes in 65 countries outside of the United States, Canada, and Puerto Rico. Operations in the excluded territories are controlled by New Avon, a privately-held company majority owned by Cerberus Capital Management, L.P. The two companies remain integrated commercial and financial partners, with Avon holding a 20 percent stake in New Avon. Avon is headquartered in London, United Kingdom.

As noted above, Avon distributes its products using sales representatives who are independent contractors and not employees of the company. As of June 2017, the company has approximately six million active representatives. These Representatives contact customers directly and market using company-produced sales materials. They generate revenue by buying products from the company at a discount and selling at the published retail price.

The segment profit determined above was determined by deducting related costs and expenses associated with revenues, including an allocation of global marketing expenses. However, it excludes other global expenses such as restructuring and asset impairment charges. Segment profit margin in 2016 ranged from 9.3 percent for South Latin America to 15.4 percent for Europe, Middle East & Africa.

CFRA analyst Joseph Agnese believes that the long-term outlook for the personal products sub-industry is favorable, and that growth in emerging markets will provide new opportunities. In particular, he projects rising demand for packaged products in emerging markets that consumers could previously not afford. Due to the company’s geographic exposure, Avon is well-positioned to benefit from growth in consumer discretionary income.

An important factor to consider is the strength of the U.S. dollar which can impact the company’s reported results. Given that Avon’s sales are primarily generated outside of the United States, a stronger dollar will generally depress the company’s revenue due to currency translation. It should be noted that Avon does not engage in significant currency hedging operations.

After a weak fourth quarter, Avon followed up with first quarter results that disappointed most analysts. According to the company, it was broadly in line with expectations. Revenue for the quarter ended March 31, 2017, was $1.3 billion, a two percent increase from the same period one year earlier. In order to exclude the impact of currency fluctuations, the company also calculates results using constant exchange rates which are updated annually. On a constant-dollar basis, revenue in the first quarter decreased one percent.  While the number of active representatives declined three percent, the company’s adjusted gross margin increased 90 basis points to 61.2 percent (primarily attributable to price/product mix). Operating margin increased 160 basis points to 2.2 percent.

Net cash used in operations in the first quarter fell to $80 million compared to $191 million in the first quarter of 2016, attributable to lower inventory and certain taxes that did not recur. At March 31, 2017, Avon listed cash of $560 million, almost $95 million less than at March 31, 2016. The company had a net working capital balance of $498 million, and listed long-term debt of $1.9 billion.

In January 2016, the company initiated a turnaround plan with the hope of achieving sustainable mid single-digit constant-dollar revenue growth, low double-digit operating margins, and active representative growth between one and two percent. The three priorities for this plan are investments in growth, cost reductions, and strengthening the balance sheet.

The company reported good progress in 2016, achieving cost savings of approximately $120 million, and reducing long-term debt by $260 million while extending the remaining maturities. This was achieved primarily by selling the North American business to Cerberus. Based on cost savings achieved in the first quarter of 2017, Avon believes that it is on track to meet its full-year cost savings target of $230 million.

However, some investors are not happy with the progress so far. Activist investors Barington Capital Group LP and NuOrion Partners AG, which collectively own three percent of the company’s shares, believe the turnaround is not progressing quickly enough, and that CEO Sheri McCoy should be replaced. Avon’s stock has declined 84 percent since she took over in 2012, but jumped nearly five percent last week when it was reported that she was considering retirement. A decision regarding her future may come soon. 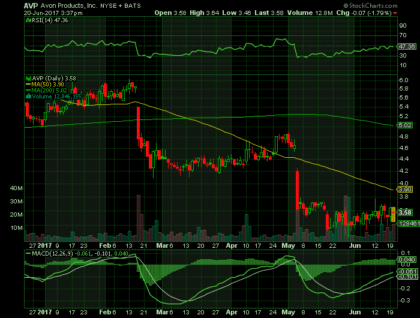 On June 20, 2017, Avon traded at $3.58, roughly flat for the day. The stock recently hit a one-year low of $3.24, but has since regained some ground. After reporting weaker than expected first quarter earnings in early May, shares of Avon dropped 22 percent. Overall, the stock is down more than 30 percent year to date, but down only 13 percent from 12 months ago.

Avon previously paid a quarterly dividend of $0.06 per share, but that policy was discontinued following the sale of the North America business. There are no immediate plans to resume the dividend.

While Avon has struggled within the past year, it has taken steps to address the underlying problems. By selling its North America business, it was able to improve its balance sheet and give the company additional operating flexibility. Now, it hopes to shore up its remaining business by investing in its sales platform and cutting costs.

Still, the company remains highly levered, and activist investors are skeptical that current management can execute on the lofty goals for revenue growth set out in its turnaround plan. Furthermore, the company continues to burn cash. It seems that CEO Sheri McCoy is on the way out, but whoever takes over will need to produce results quickly.

Traders News Source has NOT been compensated for this report by anyone and the opinions if any are that of the author Ivan Neilson, CFA. Author’s Disclosure: I have no positions in any stocks mentioned, and no plans to initiate any positions within the next 72 hours. I, wrote this article myself, and it expresses my own opinions. I have no business relationship with any company whose stock is mentioned in the article.