Irvine-based Endologix, Inc. (NASDAQ: ELGX) was founded in 1992 to develop a range of minimally invasive treatments for aortic disorders. The Company’s focus is on endovascular stent grafts for the treatment of abdominal aortic aneurysms (AAA). AAA is a weakening of the wall of the aorta, the largest artery in the body, resulting in a balloon-like enlargement.

The company developed a minimally invasive, polymer-based system (Nellix EVAS) that completely seals and fills an aortic aneurysm sac while at the same time minimizing device migration. The device has already been approved for sale in the EU since 2013.  After that approval, the company continued to develop the Nellix EVAS and subsequently revised its US PMA application.

However, during May 2017, the company announced that FDA’s response was ultimately more cautious, and after Phase III trials, the FDA decision-making panel held off approving the PMA and requested that Nellix perform a last confirmatory trial. This news was a significant setback for the business risk profile of the company. In fact, the stock fell by more than 30% in response, as the decision resulted in a roughly 3-year delay in selling the device in the US.

At that time, the management stated that although the timing for potential approval is later than its original plans, the company feels the probability of success is higher. Essentially, while the FDA agreed that the two-year results with the refined IFU are encouraging, they still want prospective evidence in the preferred Gen2 device. As per company, that confirmatory study with the Gen2 device has a higher likelihood of success and will provide further evidence that EVAS with Nellix provides excellent patient outcomes.  The company confirmed that basis-estimated timeline for enrollments, data collection, the submission, and a panel meeting; they are forecasting a potential U.S. approval in the year 2020.

More recently, on Sep 21st, the company announced the CE Mark approval for its Nellix® EndoVascular Aneurysm Sealing System (“Nellix”) with the refined Indications for Use (IFU).

Following a thorough review of supporting clinical data, the Company, together with an independent clinical reviewer, has determined that Nellix, with the refined IFU, meets the applicable safety and clinical performance requirements. As a result of these evaluations, a CE Mark for Nellix with the refined IFU has been granted.

With the recent development, it seems that the company is gradually progressing towards a growth trajectory, although difficult in the short term. The stock currently has an average rating of “BUY” and a consensus price target of $9. Considering present valuation, ELGX is at an extremely favorable risk reward position.

About the Company: Endologix, Inc. develops and manufactures minimally invasive treatments for aortic disorders. The Company’s focus is endovascular stent grafts for the treatment of abdominal aortic aneurysms (AAA). AAA is a weakening of the wall of the aorta, the largest artery in the body, resulting in a balloon-like enlargement. Once AAA develops, it continues to enlarge and, if left untreated, becomes increasingly susceptible to rupture. The overall patient mortality rate for ruptured AAA is approximately 80%, making it a leading cause of death in the U.S. 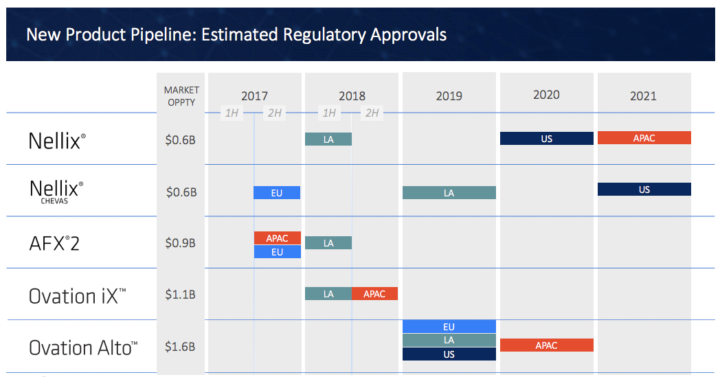 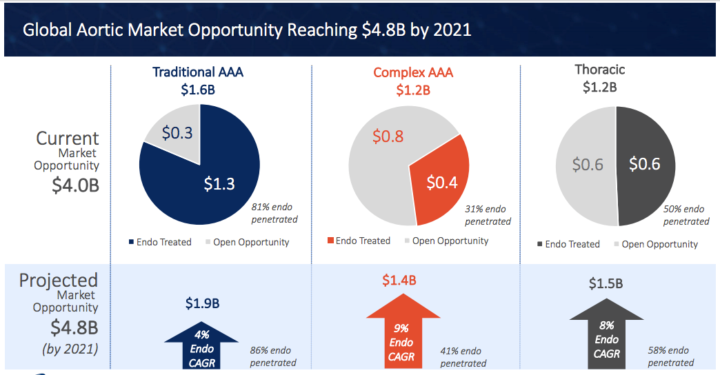 On September 11th, ELGX announced that it has signed a joint research and development agreement, as well as an exclusive distribution agreement, with Japan Lifeline Co., Ltd. (JLL) pertaining to the development and distribution of novel endovascular stent graft systems for the treatment of thoracic aortic diseases (the Systems).

Under the terms of these agreements, the two companies will jointly invest in the development, clinical research, and commercialization of the Systems. JLL has exclusive distribution rights to the Systems in Japan, and Endologix intends to commercialize and sell the Systems through its existing global sales force and distribution partners in countries other than Japan. Endologix anticipates that the global market for thoracic devices could reach $900 million by 2022, and represents a significant growth opportunity for the company.

Liquidity & Financial Flexibility: Total cash, cash equivalents, restricted cash, and marketable securities were $94.5 million as of June 30, 2017. On April 3, 2017, the Company entered into an agreement for $170 million in funding through a $120 million six-year secured term loan and a $50 million three-year secured asset-based revolving line of credit. The Company drew the entire principal amount of the term loan on April 3, 2017. Subsequently, on June 23, 2017, the Company drew $25 million under the aforementioned revolver.

Key Growth drivers for the company: 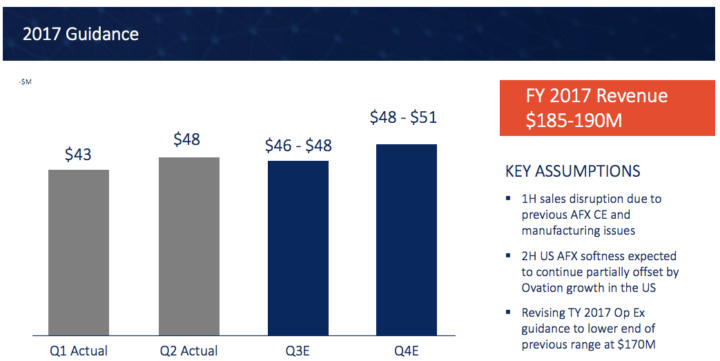 The present pipeline of ELGX is still at a nascent stage and has not yet generated meaningful revenue and will likely operate at a loss as it grows its market position and seeks ways to monetize it.

With the given circumstances, ELGX could also become a takeover target by a larger medical device entity.

ELGX has a history of losses leading to continued dilution for shareholders. Therefore, any time or cost overrun in its ongoing R&D activities, will further impact its business & financial profile. 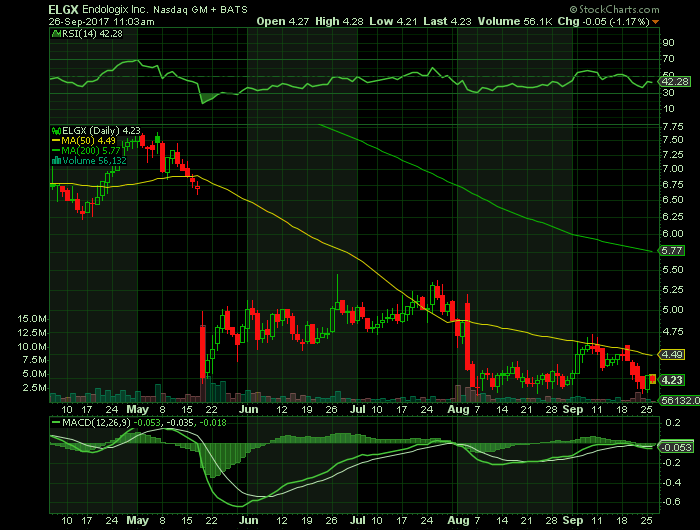 The present support and resistance levels for the stock are at $4.08 & $4.34 respectively.

Free SMS/Texts for our research reports (see below)

See our track record, it speaks for itself…

Traders News Source recent profiles and track record, 380% in verifiable potential gains for our members on 3 small cap alerts alone! These are just three examples from over two dozen winners this year. We have had the #1 gainer on the entire NASDAQ exchange 8 times this year so far and one that was the #1 gainer on the exchange two days in a row (NASDAQ: SPEX) moved from $1.01 to $4.75/ share within three days of our profile.

(NASDAQ: OBCI) coverage began February 7th, 2017 opening at $4.10/share. This coverage was due to the consistent exceptional quarterly growth coupled with a special divvy issued last year and as anticipated was announced again this year. So far OBCI has traded as high as $5.90/share for potential gains of 43% so far. http://mailchi.mp/tradersnewssource/updates-5-of-our-profiles-for-212-400-and-whats-coming-next?e=[UNIQID]