Ensco operates through three segments: Floaters, Jackups, and Other. The company owns and operates an offshore drilling rig fleet of 68 rigs, including 30 located in the Middle East, Africa, and the Asia Pacific, which comprise 4 rigs under construction; 21 situated in North and South America, including Brazil; and 17 located in Europe and the Mediterranean. It also offers management services on rigs owned by third-parties. The company serves government-owned and independent oil and gas companies. Ensco plc was founded in 1975 and is headquartered in London, the United Kingdom.

Ensco announced on July 11th that it has been awarded three drillship contracts offshore West Africa, representing an aggregate three years of contracted term and more than six additional years of options.

At the end of May, Ensco and Atwood Oceanics, Inc. (NYSE: ATW) jointly announced that they have entered into a definitive merger agreement under which Ensco will acquire Atwood in an all-stock transaction.

Under the terms of the merger agreement, Atwood shareholders will receive 1.60 shares of Ensco for each share of Atwood common stock for a total value of $10.72 per Atwood share based on Ensco’s closing share price of $6.70 on 26 May 2017. This represents a premium of approximately 33% to Atwood’s closing price on the same date. Upon close of the transaction, Ensco and Atwood shareholders will own approximately 69% and 31%, respectively, of the outstanding shares of Ensco plc. There are no financing conditions for this transaction.

Ensco expects to realize annual pre-tax expense synergies of approximately $65 million for full year 2019 and beyond. The combination is expected to be accretive on a discounted cash flow basis.

Contract drilling expense declined to $278 million in first quarter 2017 from $364 million a year ago as lower personnel expense and other activity-based costs due to fewer rig operating days more than offset rig reactivation and contract preparation costs.

The development and exploitation of alternative fuels;

Disruption to exploration and development activities due to hurricanes and other severe weather conditions and the risk thereof;

Improvement or stability in oil prices could improve the company’s performance;

Natural disasters or incidents resulting from operating hazards inherent in offshore drilling, such as oil spills, and;

The worldwide military or political environment, including uncertainty or instability resulting from an escalation or additional outbreak of armed hostilities or other crises in oil or natural gas producing areas of the Middle East or geographic areas in which we operate, or acts of terrorism. 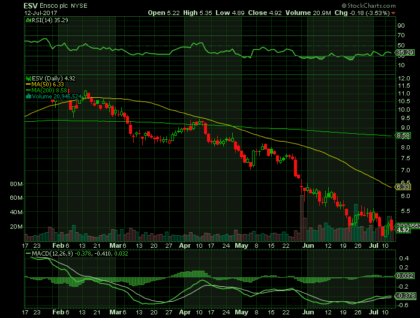 Ensco is a profitable company trading below its 50 day and 200 day moving averages. More than one source list the company’s book value over $27.00 per share, as well as a cash position over $6.50 per share. These metrics indicate that Ensco (ESV) could be trading in value territory.