Globalstar update- (NYSE: GSAT) is up 45% since our initial report on December 20th, 2016 which can be viewed at the following link- https://tradersnewssource.com/wp-content/uploads/2016/12/GSAT-Analyst-Quint-12-20-16.pdf

Globalstar, Inc. (NYSE: GSAT), provides mobile satellite services (MSS), including voice and data communications services globally through satellite. The company’s share price touched $1.96 and has been trading at almost 10 month highs after surging more than 100% since our initial coverage in December 2016. But its valuation still lags that of its peers. It could catch up, though, if the company ends up being bought out as the communications market consolidates.

In fact, its peer Straightpath (STRP) has already been giving high-end returns, with the news of being bought out by AT&T in a $1.6 billion deal. Since ultra-high band spectrum is a critical part of both AT&T and Verizon’s 5G plans, Globstar could also close their valuation gap.

The company recently announced that it would exhibit its innovative sensing and tracking technology at ENTELEC 2017 in Houston, TX, April 25-27. Globalstar, in partnership with Proactive Sensing has come up with a revolutionary new industrial-grade system capable of monitoring both fixed and mobile. Globalstar provides the level of components and services necessary for Proactive Sensing to design a cutting-edge, high-tech solution.

Prior to this, Globalstar also announced, that it would launch a new compression service for the satellite industry—this effort will include rolling out compression services developed by Yippy, Inc. (YIPI) to Globalstar’s subscribers as well as providing this technology to other MSS providers and FSS operators.

The CEO of Globalstar, indicated that the rollout of this effort has been a major initiative for the company’s satellite operations teams and last year the firm provided the service on a trial basis.  After months of rigorous testing, the conclusion is that Yippy’s platform provides subscribers with a greatly enhanced data service experience.

Over the past two decades, the global Mobile Satellite Services market has experienced significant growth. Growth in mobile satellite data services is driven by the rollout of new applications requiring higher bandwidth, as well as low cost data collection and asset tracking devices, and technological improvements permitting integration of mobile satellite services over smartphones and other Wi-Fi enabled devices.

While the stock has run up in the recent past from $0.80 levels in December 2016 (i.e. from our initial coverage) to currently at around $2, valuations are still reasonable considering the possibility of GSAT being acquired and also the fact that satellite space as an investment theme has gathered substantial pace.

Description: Globalstar is a leading provider of mobile satellite voice and data services. Representatives of industries such as government, emergency management, marine, logging, oil and gas and outdoor recreation are among Globalstar’s customer.

GSAT operates a series of satellites that cover 80% of the Earth’s surface.  It had upgraded its network to second generation technology with the launching of 10 satellites over 2010 and 2011.  Having deployed this network, GSAT is attempting to build out coverage of its broadband services both in the United States and abroad.

Major Technology: GSAT’s prominent technology is called Terrestrial Low Power Service (“TLPS”), which is the main driver of the stock in the recent past.  TLPS purports to multiply current capacity in areas presuming it receives regulatory approval from the Federal Communication Commission (“FCC”).  TLPS relies on transmission from GSAT’s low altitude satellites.  The technology promises to allow smart devices to access meaningful speed outside of areas covered by traditional wireless.

During 2016, Globalstar reached one of the most significant milestones in its history when the FCC adopted a Report and Order that will enable it to provide terrestrial authority over its 11.5 MHz of licensed 2.4 GHz spectrums. The company is now aggressively pursuing similar terrestrial authority in numerous international jurisdictions.

2016 was also a pivotal year for the company’s core MSS business, as it completed the multi-year process of upgrading gateways with second-generation infrastructure together with its partners at Hughes and Ericsson. With these enhancements, the company will be able to support products with faster data speeds, improved performance and expanded applications.

Some key influences that might govern future stock price performance include:

Total revenue for the fourth quarter of 2016 increased by $1.6 million, or 7%, from the fourth quarter of 2015. This increase was driven primarily by higher service revenue reflecting increased ARPU across all types of services. This increase in service revenue was offset partially by a decrease in revenue generated from subscriber equipment sales due primarily to the Company selling fewer Simplex units during the three months ended December 31, 2016.

During 2016, total revenue increased by $ 6.4 million to $ 96.9 million from $ 90.5 million in 2015. This increase was due primarily to a $9.0 million increase in service revenue, which is attributable to growth in average subscriber base and increases in ARPU. This increase in service revenue was offset partially by a $2.6 million decline in revenue generated from subscriber equipment sales, which resulted primarily from a lower volume of Simplex and Duplex units sold during 2016.

The company’s current sources of liquidity include cash on hand and future cash flows from operations. Globalstar has various contractual commitments related primarily to debt service obligations and capital expenditure plans and the company’s current sources of liquidity could be insufficient to meet obligations over the term of these agreements. Also, restrictions in its Facility Agreement limit the types of financings it may undertake. The company’s ability to manage its overall liquidity and financial flexibility could continue to remain a critical credit sensitivity factor over the near to medium term.

Moreover, the future issuance of additional shares of common stock could cause dilution of ownership interests and adversely affect stock price. 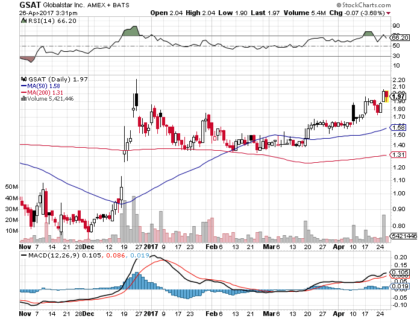 The present support and resistance levels for the stock are at $1.94 and $2.10 respectively.

We strive to highlight the future potential as well as the inherent risk in each small cap company we cover while remaining neutral as a leading third-party equity research firm.