Recent negative headlines continue to impinge the business risk profile & brand image of the company. Elizabeth Gurrieri, a former manager of reimbursement services for Arizona-based Insys, will plead guilty to one count of wire fraud conspiracy, prosecutors said in a letter filed in Boston federal court. The filing is part of the criminal case against six ex-Insys executives and managers including former Chief Executive Michael Babich, who, prosecutors say, participated in a scheme to bribe doctors to prescribe the drug, Subsys. Gurrieri would become the second former Insys employee nationally to plead guilty in connection with Subsys, an under-the-tongue spray containing fentanyl, a highly addictive and regulated synthetic opioid.

Recently, Insys issued a response to the recent media reports that highlight concerns with the Company’s past commercial practices and former employees.  Wherein, the company reiterated its commitment towards maintaining the highest ethical standards and compliance around all its activities and business practices and complying with governing laws and regulations & cooperating with relevant governmental authorities in ongoing investigations.

On the brighter side, the Food and Drug Administration (FDA) approved the final labeling for Syndros (dronabinol oral solution, a pharmaceutical version of THC), which may classify the drug as a Schedule II (CII) controlled substance. Insys Therapeutics expects to launch the product in August 2017. Syndros is indicated for the treatment of anorexia associated with weight loss in patients with AIDS, and in the treatment of nausea and vomiting associated with cancer chemotherapy in patients who have failed to respond adequately to conventional antiemetic treatments. Syndros will be a direct competitor to Marinol, a product offered by Abbvie (ABBV) in pill form. Since Syndros is a liquid, it should be easier to swallow and can be administered in prescribed dosages. If the drug launches as a Schedule III drug, Insys anticipates annual sales of $200 million to $300 million. A Schedule II designation would trim that by an estimated 20% to 25%. Dronabinol was approved by the FDA decades ago as a treatment option for cancer patients. Today, the potential applications for dronabinol, including sleep apnea, epilepsy, and opioid dependency, could catapult dronabinol into annual sales in the billions.

INSYS Therapeutics, Inc. is being covered by a number of analysts. Recently, 2 rated the stock as Buy, 2 rated Outperform, 2 rated Hold, 0 gave an Underperform and 0 rated sell. With the recent developments, we believe the company stock is categorized as ‘BUY’, as the company is reflecting reasonable bullish signs and has a medium-term average price target of $16.40 from analysts.

Insys Therapeutics is a specialty pharmaceutical company that develops and commercializes innovative drugs and novel drug delivery systems of therapeutic molecules that improve the quality of life of patients. Using proprietary sublingual spray technology and capabilities to develop pharmaceutical cannabinoids, INSYS is developing a pipeline of products intending to address unmet medical needs and the clinical shortcomings of existing commercial products. INSYS currently markets one product, SUBSYS® (fentanyl sublingual spray), CII, and has received approval for the marketing of SYNDROS™ (dronabinol) oral solution, CII, a proprietary, orally administered liquid formulation of dronabinol that INSYS believes has distinct advantages over the current formulation of dronabinol in soft gel capsule. INSYS is committed to developing medications for potentially treating addiction to opioids, opioid overdose, epilepsy, and other disease areas with a significant unmet need.

SUBSYS® and SYNDROS™ are trademarks of Insys Development Company, Inc., a subsidiary of Insys Therapeutics, Inc.

On May 16th, 2017, Insys announced that Darryl S. Baker, the Company’s Chief Financial Officer (“CFO”), will transition from the role of CFO when a successor is hired.

Insys has engaged an executive search firm to support the recruitment of a new CFO. Mr. Baker will continue to work closely with the management team, including the new CFO, to facilitate a smooth and successful transition of his responsibilities.

Revenue analysis for the first quarter of 2017:

Rationale for decline in revenue: The decrease in net revenue was attributable to a decrease in net revenue of SUBSYS®, which was the result of a 35.5% decrease in SUBSYS® shipments to pharmaceutical wholesalers and specialty pharmaceutical retailers for the three months ended March 31, 2017 due primarily to reduced demand for SUBSYS®, as compared to the three months ended March 31, 2016, combined with a 5.0% decrease in net sales price due to changes in mix of prescribed dosages and changes in provisions for wholesaler discounts, patient discounts, rebates, and returns.

Insys intends to remain committed to supporting its substantial R&D program and optimizing the performance of current approved assets as it focus on providing much needed relief to the patients for whom products are being developed.

This year, the Company is focusing on growing its commercial portfolio from one to two products, filing an NDA for buprenorphine, and significantly advancing its pipeline of products across both sublingual spray and cannabinoid platforms.

Its goal is to continue to focus on working towards a resolution in the DOJ investigation, stabilizing Subsys sales, successfully launching Syndros, and advancing its pipeline as it positions itself for future growth.

Liquidity: The Company had $218.5 million in cash, cash equivalents, short-term and long-term investments, no debt, and $267.8 million in stockholders’ equity as of March 31, 2017.

The company’s cash flows for 2017 and beyond will depend on a variety of factors, including sales of SUBSYS® and anticipated launch of SYNDROS™, regulatory approvals, investments in manufacturing and production, capital equipment, and research and development. The management, expect net cash flows from operating activities to fluctuate with the sales of SUBSYS® and SYNDROS™, partially offset by anticipated expansion in research and development, manufacturing, and general and administrative expenses.

From the recent PR and public perception standpoint it is relatively difficult for the company to see an aggressive valuation or optimistic multiple over the near term.

Insys performance and future success are dependent upon a number of factors, including their approved product sales, investments in infrastructure and growth, and their ability to successfully develop product candidates, and complete related regulatory processes. In addition, their ability to ensure that their products, policies, and practices adhere to the extensive national, state, and local regulations applicable to the industry is critical to their success 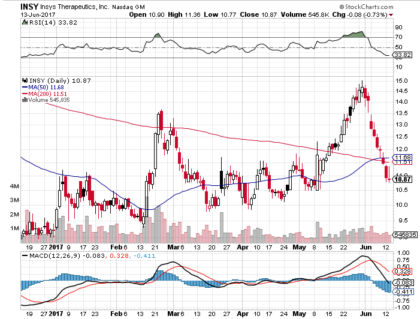 Newer PostArt Cashin warns the Fed: 'Wake up,' the economy isn't as good as it looks
Older PostWhy a 'bad year for bonds' has turned into a pretty good one