Intrepid Potash (NYSE: IPI) is the only U.S. producer of muriate of potash. It also produces a specialty fertilizer, Trio®, which delivers three key nutrients, potassium, magnesium, and sulfate, in a single particle.

As per management, the company continues to execute on its strategy to diversify its income base and have been successful in increasing sales of water and by-products. Water sales are continuing to grow, and the company is working to put in place a broad set of arrangements with the goal of generating a significant long-term revenue stream.

IPI expect at least $20 million to $30 million in water sales during 2018, and the additional cash flow streams will allow Intrepid to handle the normal variability of the fertilizer commodity cycle better, while also creating synergies in existing markets.

Furthermore, IPI’s business and operational profile are expected to benefit from its strategy of shifting to solar-only potash production and expand Trio® sales in the third quarter as well, leading to improved potash margins and a year-over-year increase in Trio® sales volume.

Moreover, strong demand in domestic markets and an increase in international sales, is expected to drive Trio sales volumes. Also, Recent price decreases have made Trio more competitive in some crop markets, and therefore the company is aggressively expanding its domestic warehouse footprint. 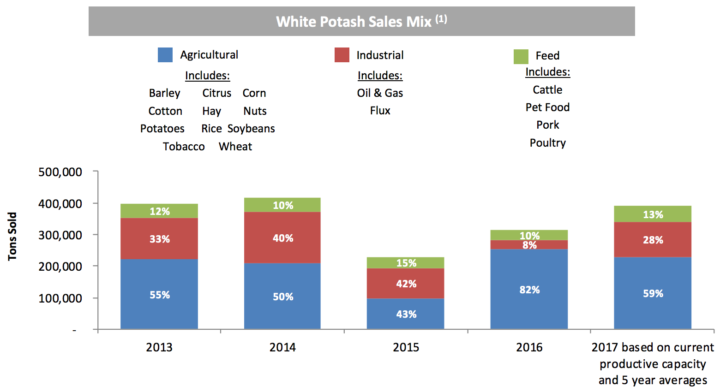 IPI’s improving results and increased visibility is expected to enable further reduction in the outstanding balance on senior notes, utilizing remaining proceeds from first quarter equity raise and cash from operating activities. Considering these factors, the analysts are positive about Intrepid’ upcoming results, and the consensus opinion of $3.95 looks like a hold.

About the Company: Intrepid Potash (NYSE: IPI) is the only U.S. producer of muriate of potash. Potash is applied as an essential nutrient for healthy crop development, utilized in several industrial applications and used as an ingredient in animal feed. Intrepid also produces a specialty fertilizer, Trio®, which delivers three key nutrients, potassium, magnesium, and sulfate, in a single particle. Intrepid also sells water and by-products such as salt, magnesium chloride, and brine.

Intrepid serves diverse customers in markets where a logistical advantage exists; and is a leader in the utilization of solar evaporation production, one of the lowest cost, environmentally friendly production methods for potash. Intrepid’s production comes from three solar solution potash facilities and one conventional underground Trio® mine.

Key differentiating factor for the company:

Key Outlook and initiative for 2017 and beyond:

Consolidated gross margin increased to $3.8 million and $4.6 million in the third quarter and first nine months of 2017, respectively. Increases were primarily the result of the transition to lower-cost solar-only potash production and higher average potash net realized sales pricing1.

During the third quarter and first nine months of 2017, the potash segment generated gross margins of $5.0 million and $11.4 million, respectively, an increase of $12.3 million and $35.9 million compared with the same periods in 2016, respectively. These improvements were the result of the transition to lower-cost solar-only production and an increase in average net realized sales price per ton.

During the quarter, Intrepid continued its strategy of selectively selling to higher-margin sales locations and customers. This, combined with increases in the market price for potash, increased average potash net realized prices per ton by 30% and 19% for the third quarter and first nine months of 2017, respectively, compared with the same periods in 2016. Potash production increased 8% compared to the third quarter of 2016 as earlier start-up of the solar production facilities offset the idling of the West facility in July 2016. Potash production for the first nine months of 2017 decreased 38% compared to prior year, primarily due to the idling of the West facility and the transition to Trio®-only production at the East facility. The reduced potash production profile decreased sales volumes in the third quarter and first nine months of 2017 by 52% and 49%, respectively, compared to the year-ago comparable periods.

The Trio® segment generated a gross deficit of $1.2 million and $6.7 million in the third quarter and first nine months of 2017, respectively. Gross deficit increased due to lower net realized sales prices and increased lower-of-cost-or-market adjustments.

Sales volumes increased 72% and 65% in the third quarter and first nine months of 2017, respectively, compared with the same periods in 2016. Increased volumes were the result of an increase in international marketing efforts and a more stable pricing environment for domestic sales. Net realized sales prices decreased compared to prior periods due to increased international sales volumes, which carry lower pricing, and price decreases announced over the past year. Production decreased 40% in the third quarter of 2017, compared to the prior year, as Intrepid operated at reduced rates to match production to expected demand and manage inventory levels. In the third quarter of 2016, Intrepid operated at full rates for the majority of the quarter to prove operational capabilities. Intrepid expects near-term Trio® margins will continue to be pressured due to the reduced pricing and production rates.

Cash balance was $1.7 million as of September 30, 2017. Cash provided by operations activities increased to $2.5 million and $14.1 million for the third quarter and first nine months of 2017, respectively, compared to prior year periods.

During the third quarter, Intrepid repaid $6.0 million in outstanding senior note principal, bringing total senior note repayments to $75 million since December 31, 2016. No further repayments are required under the note agreement for the remainder of 2017. As of September 30, 2017, Intrepid had $60 million outstanding under its senior notes and $22.5 million available for borrowing under its asset-backed credit facility.

Continued improvement in the diversification of revenue stream and the company’s ability to expand its Trio sales internationally and manage associated risks.

The business risk profile of the company is subject to the risks related to changes in the price, demand or supply scenario of potash, langbeinite and chemically similar products; along with declines or changes in agricultural production or fertilizer application rates.

Furthermore, the company is significantly exposed to environmental risks and changes in government regulations, including environmental and mining laws.

The company’s near to medium term stock movement is dependent on its upcoming quarterly result, any major adversities with the same could impinge the stock performance significantly. 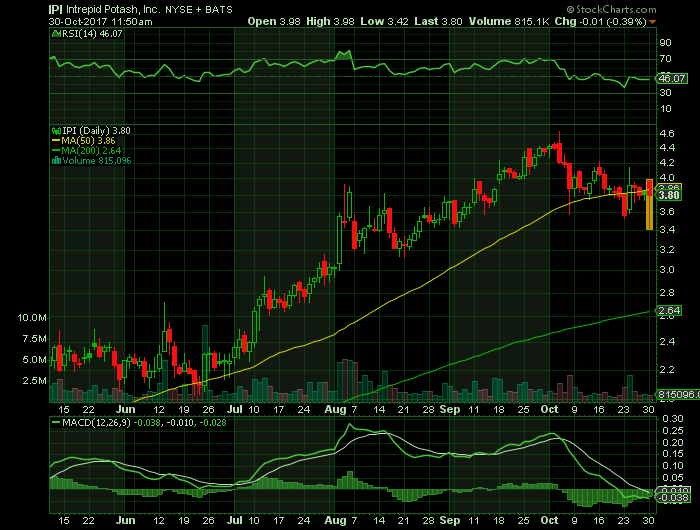