Keryx Biopharmaceuticals, Inc. (NASDAQ: KERX), with headquarters in Boston, Massachusetts, is a commercial-stage company focused on bringing innovative medicines to people with renal disease. Keryx has programs underway to leverage its development and commercial infrastructure, including evaluation of ferric citrate as a treatment for iron deficiency anemia in adults with non-dialysis dependent chronic kidney disease (CKD) and in-licensing medicines for renal disease.

The company is poised for a Label Expansion Opportunity. A supplemental new drug application seeking approval of Auryxia for the treatment of patients with iron deficiency anemia and non-dialysis dependent CKD is currently under review, with a November 6, 2017, PDUFA action date. If approved for this indication, Keryx will have two indications for Auryxia to leverage its commercial infrastructure, as well as the broad patient access, familiarity and relationships established to date in treating hypophosphatemia.

The upcoming PDUFA action is likely to be one of the major near-term catalysts for the stock, as currently there is no FDA approved oral treatment to treat iron deficiency in non-dialysis-dependent chronic kidney disease. Therefore, KERX’s business risk profile is at a critical inflection point with a strong possibility to get the benefits of the catalyst.

The drug has already presented encouraging results in a pivotal Phase 3 trial where it showed statistically significant differences over placebo for the primary and secondary endpoints and potential FDA approval could help in expanding the addressable market for the drug as it will then be able to cover the NDD market, which consists of patients who are not yet required to be put on dialysis, or the stage which is referred to as End Stage Kidney Disease (ESKD).

Iron deficiency anemia is a severe disease and, today, as many as three out of four people with CKD and iron deficiency anemia are not being optimally treated with existing iron supplements. KERX is working diligently to ensure that they are prepared, pending FDA approval in early November, for a successful launch in this indication.

From a market size perspective, it is estimated that there are around 1.7 million NDD-CKD patients in the US itself. Out of these nearly 650,000 are being treated for iron deficiency anemia (IDA), presenting a significant untapped market for the drug, which is likely to be around $2.8 billion.

The company had recently announced its financial results for the quarter ended June 30, 2017. It also reviewed its commercial progress with Auryxia and upcoming milestones. Keryx reported second-quarter 2017 net U.S. Auryxia product sales of $14.1 million compared to $8.3 million in the second quarter of 2016, an increase of 71 percent.

The second quarter results reflect continued strength in Auryxia’s prescription demand. Increasing breadth and depth of prescribing among physicians primarily drove this demand. In fact, with this strong momentum, the company has increased its annual net Auryxia product sales guidance, reflecting improved confidence in its ability to bring this medicine to a greater number of people with chronic kidney disease (CKD) on dialysis this year. 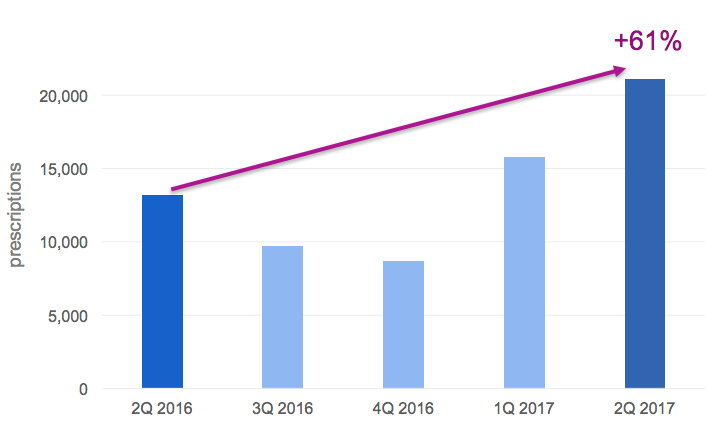 The management is extremely bullish about the opportunity to potentially add a second indication for Auryxia for the treatment of iron deficiency anemia in people with non-dialysis dependent chronic kidney disease. The progress that the company is making in dialysis coupled with the large opportunity to treat iron deficiency anemia form a solid basis for near to medium term.

Driven by the abovementioned factors, which are expected to translate into better business & financial performance for the drug in the coming months, Traders and investors seem to be pricing KERX positively. The stock currently has an average rating of “BUY” and a consensus price target of $9.50. Considering present valuation, KERX is at an extremely favorable risk-reward position.

Keryx has programs underway to leverage its development and commercial infrastructure, including evaluation of ferric citrate as a treatment for iron deficiency anemia in adults with non-dialysis dependent chronic kidney disease and in-licensing medicines for renal disease. 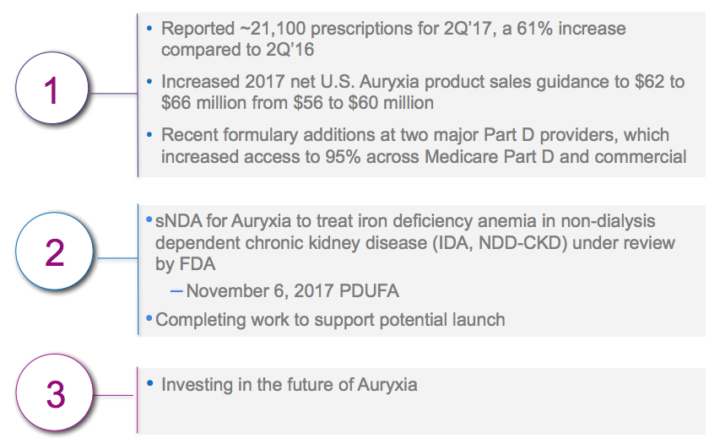 The second quarter reflects strong demand and sales of Auryxia and therefore the management raised Auryxia’s 2017 net product sales guidance to $62 to $66 million. Additionally, the capital raised via the ATM strengthens its balance sheet and provides it with the financial flexibility/liquidity to continue to invest in business to support its anticipated growth appropriately. 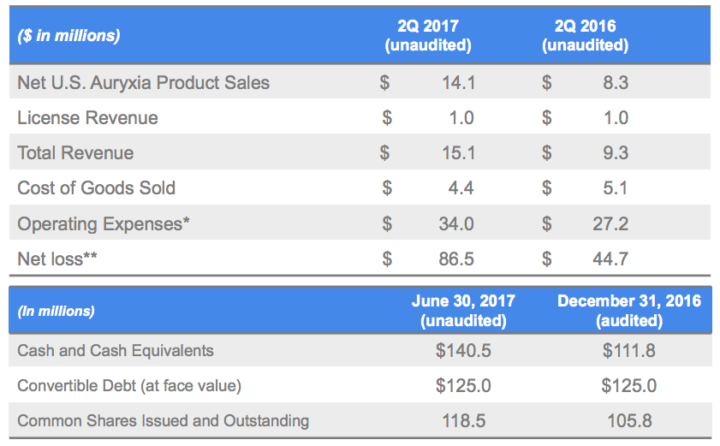 Research and development expenses for the quarter ended June 30, 2017 were $9.0 million, as compared to $7.0 million during the same period in 2016. The increase was primarily related to manufacturing and clinical activities to support the long-term growth of Auryxia.

Net loss for the quarter ended June 30, 2017 was $86.5 million, or $0.77 per share, compared to a net loss of $44.7 million, or $0.42 per share, for the comparable period in 2016. The increase in net loss is attributable to the recognition of $63.0 million of non-cash debt discount amortization related to the company’s outstanding convertible debt. This amortization expense is not expected to recur in future periods.

The company had been troubled by production issues, which impacted its revenue potential in negative ways in the past. Recurrence of any such exigencies would impinge the business risk profile of the company.

The upcoming catalyst of the FDA decision and continued improvement in drug distribution are expected to provide a boost to the stock to retain its momentum. Any adversities related with the same could upset the stock performance significantly.

KERX presently has net level losses. Therefore, any crunch in its liquidity and financial flexibility will further impact its business & financial profile. 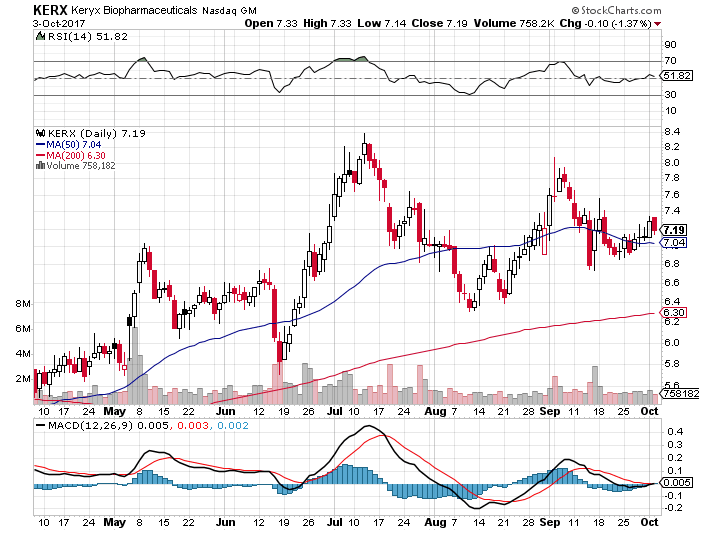 The present support and resistance levels for the stock are at $7.10 & $7.30 respectively.