Synergy Pharmaceuticals Inc. (NASDAQ: SGYP) is a biopharmaceutical company focused on the development and commercialization of gastrointestinal (GI) therapies. The Company’s product candidates include TRULANCE (plecanatide) and dolcanatide.

The company was a developmental-stage entity until March 2017, and it began to commercialize in Q2 with the release of its flagship and the first commercial product “Trulance”, for the treatment of adults with chronic idiopathic constipation (CIC).

The management is satisfied with the overall execution of its commercial strategy, and the strong initial demand for TRULANCE, reinforcing the need for new treatment options for patients suffering from CIC. And the company is making significant progress in ensuring broad access to TRULANCE, highlighted by a number of favorable early decisions from key national payers. 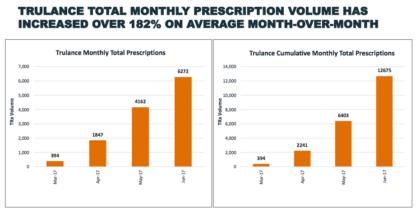 According to some medical sources, 1 out every 7 person has symptoms of constipation, with an estimated 33 million people in US alone thought to be suffering from CIC. Synergy is targeting this huge market with the introduction of Trulance, and the company’s financial statements indicate it is on a favorable risk reward situation at the moment.

More recently, the company’s stock has been on a free fall for multiple reasons, including surge in its overall marketing and promotional expenditures (approximately $23.1 million in Q2) for the commercial launch of Trulance & increasing woes about its present liquidity/financial flexibility and overall capital requirements (along with likely funding pattern) over the near to medium term. Adding to the damage, the latest financial performance of the company also impinged its share performance.

All these factors put together curtailed SGYP’s market cap at around $680 million, roughly half of where it was at the beginning of 2017. Also moving forward, one of the major concerning factors is the risk of further dilution. Synergy has shown a strong preference, for fund-raising through equity issuance, rather than contracting debt.

Notwithstanding the recent muted performance of the company, Synergy’s Trulance launch is likely to give a boost to its near to medium term business performance.

Upcoming approval for the treatment of IBS-C indication (PDUFA by January 24, 2018) could be another major trigger for Synergy. The approval would extend Trulance’s potential customer base by another 35%.

Moreover, successful partnership with major players to market Trulance worldwide would be another key catalyst for its stock performance over the near to medium term.

The Company could potentially be a major player in the treatment of GI diseases/disorders. It is dependent on success of Trulance, which claims to have relatively lesser side effects. With the recent developments, analyst have revised their outlook on the stocks: The stock currently has an average rating of “BUY” and a consensus price target of  $10.47, suggesting above 300% gain from recent levels. Considering present valuation, SGYP is at a favorable risk reward position. 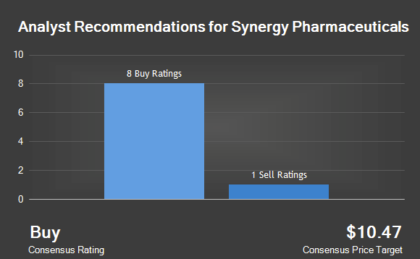 Description & about the Company:

Synergy is a biopharmaceutical company focused on the development and commercialization of novel GI therapies. The company has pioneered discovery, research and development efforts on analogs of uroguanylin, a naturally occurring and endogenous human GI peptide, for the treatment of GI diseases and disorders.

The first half of 2017 was a transformative period for Synergy, as it transitioned into a commercial organization and launched its first product, TRULANCE, in the U.S. for the treatment of adults with chronic idiopathic constipation (CIC).

During the second quarter, it also made significant progress towards broadening the TRULANCE label with the FDA acceptance of its NDA for the treatment of adults with IBS-C

Since launch of TRULANCE on March 20, 2017, Synergy’s commercial team continues to introduce TRULANCE to more than 27,000 gastroenterologists, primary care physicians, nurse practitioners and physician assistants that represent approximately 70% of the branded prescription business. As of June 30, 2017, it had reached 66% of its targeted prescriber base and over 90% of the high volume prescribers (deciles 8-10). According to QuintilesIMS data as of June 30, 2017.

The Company has closed on a $300 million debt financing structured as senior secured loans from CRG LP, a healthcare focused investment firm, and its lender syndicate. The financing was announced September 5, 2017. The first tranche of $100 million was funded upon execution of the loan documents. The loan agreement provides for future borrowings, subject to the satisfaction of certain financial and revenue milestones and other borrowing conditions as follows: (i) an additional $100.0 million on or before February 28, 2018, and (ii) up to two additional tranches of up to $50.0 million each on or before March 29, 2019. The loans mature on June 30, 2025 and payments under the loan are interest only paid quarterly for the initial five-year period, followed by 12 equal quarterly installments of principal and interest during the final three years of the term, which converts to an eight-year interest only period if certain milestones are achieved. The loans carry an annual interest rate of 9.50%.

Revenues:  Net sales were $2.3 million in the second quarter of 2017, pursuant to the product launch on March 20, 2017. The Company also recorded approximately $1.5 million in net deferred revenues on its balance sheet, which it expects to recognize in future periods. The Company currently recognizes revenue based on patient demand (prescription sales).

Some key influences that might govern future stock price performance include:

The company’s aggressive business plans entails substantial incremental funding. Synergy has shown a strong preference towards issuance of equity, rather than the contracting debt. Therefore, The major near-term concern for its share price is potential risk of further dilution.

Upcoming approval for the treatment of IBS-C indication (PDUFA by January 24, 2018) would be another major positive trigger for the company. The approval is likely to extend Trulance’s potential customer base by another 35%.

Moreover, successful partnership with major players to market Trulance worldwide would be another key catalyst for its stock performance over the near to medium term. 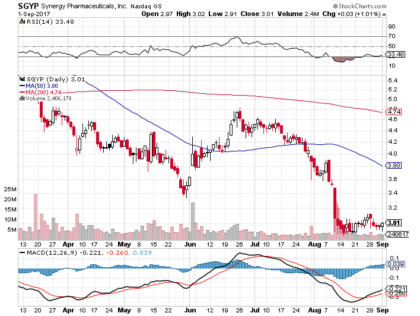 The present support and resistance levels for the stock are at $2.87 & $3.05 respectively.