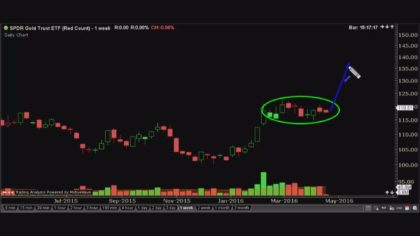 Article Link: Trader: Gold is about to break out—here’s why

After a strong start to the year, gold prices have been range bound—but that’s all about to change, according to one technically minded trader.

“The gold market is about to make a move up,” Todd Gordon said Wednesday on CNBC’s “Trading Nation.”

Gordon noted that gold prices surged more than 20 percent from the start of 2016 to the year-to-date high last month, but as equities inch closer to all-time highs, the momentum in the safe haven asset has stalled.

“I’m starting to see an inter-market warning sign between the stock market and gold,” the founder of TradingAnalysis.com said. “The S&P 500 might be reaching a top,” and that means the gold rally will resume.

On a chart of the S&P 500 versus the GLD, the ETF that tracks gold prices, Gordon pointed out that the GLD is holding firm support, while the S&P looks to be hitting resistance.

“It might be time to pare back on these long positions in the stock market,” said Gordon, a CNBC contributor. Meanwhile, he added, “Gold is sitting on this trampoline of sorts, which could launch it on the next move up.”

To play for the next leg higher in gold, Gordon recommended buying the GLD June 120/122 call spread for 90 cents. This is a bullish strategy where a trader will buy a call and sell a higher strike call of the same expiration to offset the cost. The goal in this instance is for the GLD to rise to the higher strike by expiration, or to 122 in eight weeks. That’s another 2 percent from current levels and puts gold back at year-to-date highs.

“We will look to ride this trade up or extend it if we are right on the S&P,” Gordon concluded.

On the other hand, not everybody is so bullish on gold:

Read MoreStrategist: Why you need to ‘stay away’ from gold

Newer PostStrategist: Why you need to ‘stay away’ from gold
Older PostDiscover Financial jumps on earnings beat