Exelixis, Inc. (NASDAQ: EXEL) is a pharmaceutical company that develops and commercializes medicines to improve care and outcomes for cancer patients. The company’s current roster of drugs is comprised of products derived from cabozantinib, an inhibitor of multiple tyrosine kinases, and cobimetinib, a selective inhibitor of the MEK pathway. Applications include the treatment of advanced kidney cancer, progressive, metastatic medullary thyroid cancer (MTC), and melanoma. Exelixis was formed in 1994, and is headquartered in South San Francisco, California.

Since inception, Exelixis has developed three drugs which have received regulatory approval and are sold commercially. Following is a summary of the company’s approved and marketed products:

Cometriq (cabozantinib) was the company’s first marketed product after receiving FDA approval in November 2012 for the treatment of progressive MTC. In March 2014, the European Commission granted a similar authorization. Cometriq is marketed in the E.U. by Ipsen Pharma SAS, Exelixis’ marketing partner. In 2016, the company generated $39 million of net revenue in the U.S. from the sale of Cometriq, and $2.5 million from distribution partners.

Cabometyx (cabozantinib) is currently approved in the U.S. (as of November 2016) for the treatment of patients with advanced renal cell carcinoma (RCC) who have received prior anti-angiogenic therapy. The drug also received approval in the European Union in September 2016. Outside the U.S. and Japan, Cabometyx is marketed by Ipsen. In 2016, Exelixis generated $94 million of net revenue in the U.S. from the sale of Cabometyx.

Cotellic (cobimetinib) was approved by the FDA in November 2015 as part of a combination regiment (with vemurafenib) for the treatment of patients with advanced melanoma. Cotellic is marketed under a collaboration with Genentech (a member of the Roche group). It has also been approved in the E.U, Switzerland, and Canada. In 2016, Exelixis recognized $3 million of collaboration revenues from ex-U.S. sales of Cotellic. 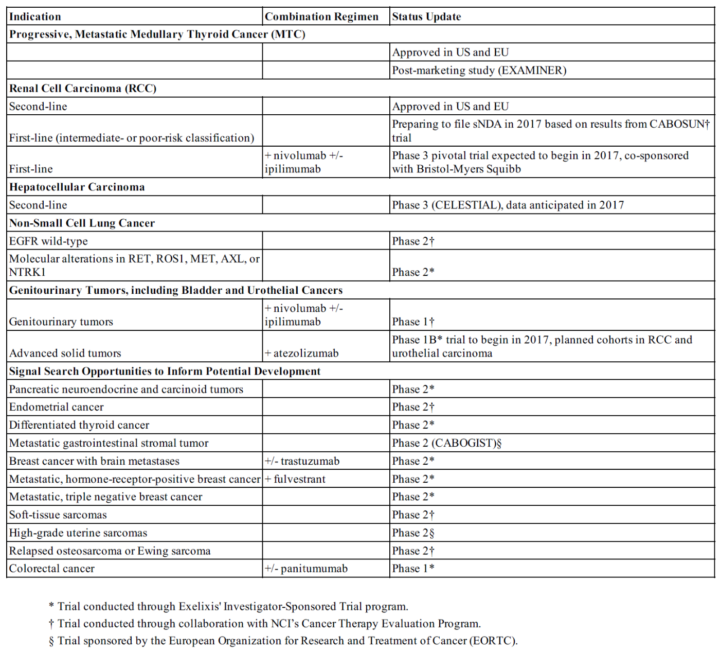 The American Cancer Society cites kidney cancer as one of the ten most commonly diagnoses forms of cancer among both men and women in the United States. The second and later-line RCC is market is large and still growing. Studies suggest that the drug eligible population includes 17,000 patients in the United States and 37,000 globally. As noted above, Exelixis is pursuing additional label indications for cabozantinib, including approval for first-line treatment of kidney cancer, which would greatly expand its customer base.

In the quarter ended June 30, 2017, Exelixis reported revenue of $99 million as compared to $36.3 million for the same period in 2016. The company reported $88 million of net product revenue from cabozantinib, a 28 percent increase from the first quarter of 2017 and a 178 percent increase from the same period one year ago. The remaining $11 million consists of collaboration revenues with Ipsen, Takeda, and Genentech.

Research and development costs increased 23 percent year-over-year to $28 million. This was primarily due to clinical trial costs. Selling, general, and administrative expenses also increased 14 percent to $40.8 million due to an increase in headcount. Net income in the second quarter was $17.7 million ($0.06 per share) as compared to a net loss of $34.8 million ($0.15 per share) for the same period one year ago.

The company expects that costs and operating and expenses for the full year (2017) will fall between $290 and $310 million. 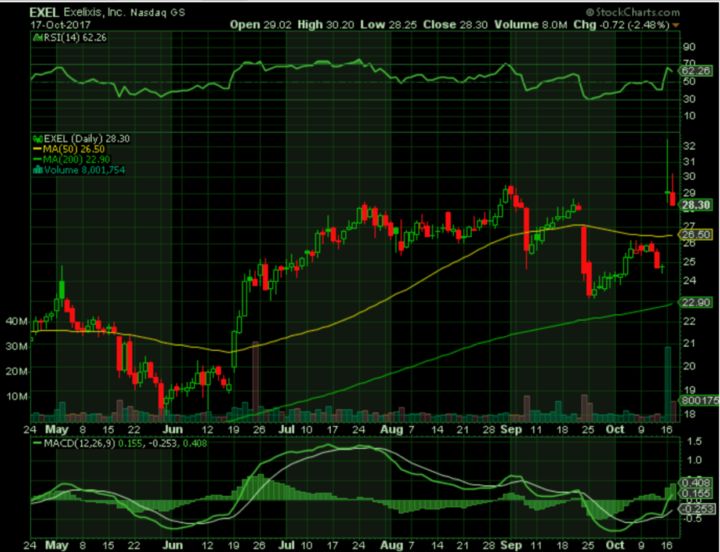 As of October 17, 2017, shares of Exelixis closed at $28.30 after losing 2.5 percent on the day, yielding a market capitalization of $8.3 billion. The stock has done well in the past year (up 150 percent) due to improving sales and optimism surrounding expanded applications for the company’s approved products. Although the shares lost 17 percent in September, they gained 17 percent following the suspension of the Celestial trial.

The recent data from the Celestial study is a certainly positive development, and if the company submits a new drug application in the first quarter of 2018, FDA approval could come as soon as the end of next year. Perhaps more encouraging is the scheduled review for Cabometyx as a first-line treatment for RCC.

With plenty of cash and reduced debt, the company is positioned to grow in a sustainable manner. Additional upside will come from ongoing clinical trials.

Newer PostState pension funds continue to fall behind. Here's how much you owe
Older PostThe 2017 chart of the stock market looks 'eerily similar' to the one that crashed 30 years ago