We strive to highlight the future potential as well as the inherent risk in each small cap company we cover while remaining neutral as a leading third-party equity research firm.

2016 has proven to be a breakout year for IDXG, including strong revenue growth & significant cost reductions. From a balance sheet perspective, the company raised $14 million in gross equity and restructured over $9.3 million of secured debt, thereby partially improving its liquidity. The company’s liquidity has deteriorated in the past as negative profitability coincided with high payment obligations. However, recent restructuring is expected to lend substantial comfort to IDXG’s overall financial flexibility.

Over the last year, IDXG has transitioned into a fully integrated, commercially based molecular diagnostics entity. The company could have a strong base, as well as momentum into 2017, especially with its recent accomplishments, including New York State and AETNA approvals of ThyraMIR®, its microRNA assay, that is complementary to ThyGenX®.

To share more details on its present pipeline and outlook over the near to medium term, the company will be presenting at this year’s MicroCap Conference on April 4th in New York City. The company’s stock is on a modest growth path after these positive developments over the past few months based on its prospects.

IDXG is a fully integrated commercial company that provides clinically useful molecular diagnostic tests and pathology services for evaluating risk of cancer by leveraging the latest technology in personalized medicine for improved patient diagnosis and management.

According to the American Thyroid Association, approximately 15% to 30% of the 525,000 thyroid fine needle aspirations (FNAs) performed on an annual basis in the U.S. are indeterminate for malignancy based on standard cytological evaluation, and thus are candidates for ThyGenX and ThyraMIR.

ThyGenX and ThyraMIR reflex testing yields high predictive value in determining the presence and absence of cancer in thyroid nodules. The combination of both tests can improve risk stratification and surgical decision-making when standard cytopathology does not provide a clear diagnosis for the presence of cancer.

Revenue for three- and twelve-month periods ended December 31, 2016 was $3.1 million and $13.1 million, respectively, an increase of 22% and 39% over the prior year periods. This increase was principally attributable to increased test and collection volume of ThyGenX ® and ThyraMIR ®, and an increase in reimbursements, principally for ThyraMIR ® tests. 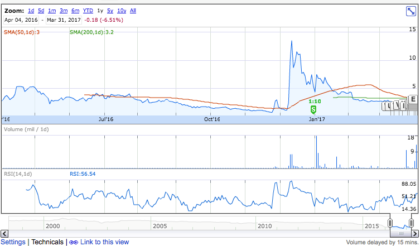 The present support and resistance levels for the stock are at $2.55 & $2.78 respectively.

There are Big Opportunities in Small Cap’s in 2017