AbbVie Inc. (NYSE: ABBV) is a research-based pharmaceutical company. AbbVie is engaged in the discovery, development, manufacturing, and sale of a variety of pharmaceutical products. These include treatments for chronic autoimmune diseases, oncology, virology, neurological disorders, and metabolic diseases. The company also maintains an active development pipeline in these areas, with additional targeted investment in cystic fibrosis and women’s health.

AbbVie’s products are generally sold to wholesalers, distributors, government agencies, health care facilities, and retailers. The company was originally an integrated pharmaceutical unit of Abbott Laboratories, but was spun off in January 2013. AbbVie is headquartered in North Chicago, Illinois.

AbbVie’s primary source of revenue is Humira (adalimumab), but the company has several other products which have been approved for sale. Below is a summary of the company’s product portfolio and its annual net revenues:

As shown above, AbbVie’s three leading products contributed more than 75 percent of the company’s net revenues in 2016.

Humira is one of the best-selling drugs in the world by a significant margin. It is a biologic therapy administered as a subcutaneous injection for the treatment of (among other things) rheumatoid arthritis, psoriatic arthritis, Crohn’s disease, plaque psoriasis, ulcerative colitis, and other autoimmune diseases. While AbbVie faces significant potential competition from manufacturers of biosimilar products, the company believes that it can enforce its intellectual property rights until 2022.

Imbruvica (ibrutinib) is a once-daily oral therapy for the treatment of patients with chronic lymphocytic leukemia. It has also received conditional approval for the treatment of mantle cell lymphoma and marginal cell lymphoma. Imbruvica has also received breakthrough therapy designation for chronic graft-versus-host-disease. While Imbruiva brings in significantly less revenue than Humira, it is growing rapidly. It is currently in three Phase II studies and three Phase III studies for a variety of additional applications. With further regulatory approvals, the company believes that annual net revenue from Imbruvica could hit $7 billion.

Viekira (ombitasvir, paritaprevir and ritonavir tablets, dasabuvir tablets) is an all-oral, short-course, therapy for the treatment of genotype 1 chronic hepatitis C virus (HCV). In Europe, the company’s HCV treatment is marketed as Viekira + Exviera and is approved for use in patients with genotype 1 and genotype 4 HCV. Sales of Viekira fell in 2016, likely due to several new HCV treatments becoming available.

AbbVie’s pipeline consists of more than 50 compounds or indications in clinical development individually or under collaboration / licensing agreements. More than half of these programs are in mid or late-stage development. At a recent healthcare conference hosted by Deutsche Bank, AbbVie CFO Bill Chase stated that the company expects to have 20 new assets in place by 2020. Some of the more promising candidates are:

Rova-T­ – an oncology treatment in registrational trials for small cell lung cancer and in early-stage clinical development for other solid tumors. If successful, the drug could hit peak annual sales of $5 billion.

Risankizumab – an anti-IL-23 monoclonal biologic antibody in Phase III development for psoriasis. It is also being evaluated for therapy in Crohn’s disease, psoriatic arthritis, and asthma. If successful, the drug could hit peak annual sales of $4 billion.

Upadacitinib (ABT-494) – is the company’s selective JAK-1 inhibitor which is currently in late-stage development for the treatment of rheumatoid arthritis. Projected peak sales for upadacitinib total $3.5 billion annually.

AbbVie is scheduled to report on several clinical studies in the next two quarters, and the results could provide an immediate boost to its share price. For instance, the TRINITY pivotal study of Rova-T for the treatment of small cell lung cancer is expected sometime in the second half of 2017, as is Phase III data for risankizumab as a treatment for psoriasis. With respect to upadacitinib, the SELECT-BEYOND study involving rheumatoid arthritis patients is expected to read out sometime this summer, and another Phase III study (SELECT-COMPARE) using Humira as a comparison drug should be reported on by the end of the year.

AbbVie reported 2017 first quarter revenue of $6.5 billion, representing 10 percent growth year-over-year. This was driven by strong sales of Humira and Imbruvica which helped to overcome falling sales from Viekira and certain other drugs. Global Humira sales increased 15 percent year-over-year, while net revenue from Imbruvica increased 45 percent to $551 million. Overall, the company reported a gross margin of 75 percent on a GAAP basis, and nearly 80 percent on an adjusted basis.

Selling, general, and administrative expenses were roughly flat, while research and development expenses increased 20 percent to $1.1 billion. Overall, the company’s operating margin decreased slightly to 37 percent. Adjusted diluted earnings per share (which excludes intangible asset amortization and certain other items) was $1.28 per share, an 11 percent increase from the same period one year ago.

For the quarter ended March 31, 2017, the company had cash flows from operations of $2.1 billion, comparable to the same period last year. Approximately $1 billion was paid out as dividends while another $900 million was used to purchase treasury stock.

At March 31, 2017, AbbVie listed cash and short-term investments equal to $6.1 billion, slightly lower than the previous quarter’s balance of $6.4 billion. The company had net working capital of $6.7 billion, and listed long-term debt and lease obligations of $36.5 billion. 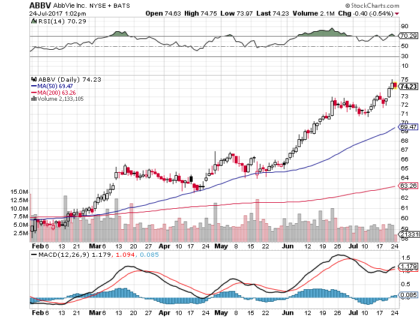 As of June 23, 2017, shares of AbbVie closed at $72.64, yielding a market capitalization of approximately $116 billion. In the past year, the shares have gained more than 20 percent. The stock price sold off sharply prior to the U.S election, hitting a low of $55.06, but have since recovered and recently hit a one-year high of $71.81.

The stock pays a quarterly dividend $0.64 per share which equates to an annual yield of approximately 3.6 percent. AbbVie has raised its dividend every year since inception, and in February the company announced a $5 billion increase to its stock repurchase program.

AbbVie has a dominant product in Humira that is likely to continue its growth trajectory. However, it accounts for more than 60 percent of the company’s revenue, and this lack of diversification is worrying to investors. If competitors successfully challenge Humira’s intellectual property and begin marketing biosimilars on a large scale, the company could be adversely affected.

However, AbbVie is confident that it can defend Humira until 2022, giving the company time to develop new products and find additional applications for existing drugs. With several new product candidates and many ongoing clinical trials, the company is well-positioned to diversify its product base. In the interim, AbbVie has a strong history of rewarding shareholders with dividends and buybacks and generates the necessary cash flows to continue doing so.

[1] A portion of Imbruvica’s net revenue is allocated to the company’s marketing partner, Johnson & Johnson.