Halcón Resources Corporation (NYSE: HK) is an independent energy company, engaged in the acquisition, production, exploration, and development of onshore oil and natural gas properties in the United States.

Shares of Halcón Resources soared this week after the shale oil company agreed to a deal to sell most of its assets in the North Dakota’s Bakken region. Privately owned Bruin E&P Partners will pay $1.4 billion in cash to Halcón in exchange for its operating assets in the Williston Basin area. The company indicated it intends to purchase up to half of its 6.75% unsecured notes due 2025 and redeem all outstanding 12.0% second lien notes due 2022, with the proceeds. The deal is scheduled to close in August. If the deal fails, Halcón will pay Bruin E&P $42 million as compensation.

The company had been adversely affected by the unfavorable crude environment and filed for bankruptcy in July 2016. In September, it completed a financial restructuring and emerged from bankruptcy. Halcón has been divesting assets in most of its basins in order to concentrate on its Delaware Basin assets.

Since the beginning of 2017, the company has been strengthening its foothold in the Delaware Basin through acquisitions. This has enabled Halcón to increase its acreage in the region. In the Delaware Basin, the company currently owns over 41,000 net acres in Ward and Pecos counties. In January, Halcón acquired over 21,000 acres in Pecos for $705 million, while divesting the El Halcón assets in the East Texas Eagle Ford for $500 million. Halcón also intended to purchase an additional 15,040 net acres in Ward. The company bought around 594 acres in Pecos in March with a production capacity of 160 Boe/d. In June, the company further increased its acreage by over 3,600 acres in Pecos.

The Bruin deal marks Halcón’s transformation into a single-basin company, focused on the Delaware Basin portion of the Permian Basin – one of the most active and economic Basins in North America. The proceeds from the asset sale will be utilized in paying off $735 million of debt. This will strengthen the company’s balance sheet and provide it with increased liquidity to invest in its drilling growth projects.

The Bruin deal has changed Halcón’s existing asset base and modified its prior production outlook. The company had expected to produce around 39,000–41,000 Boe/d in 2017 prior to the asset sale agreement. After the Bruin deal the current production guidance of the company has gone down to 7,500 boe/d. The company plans to operate two rigs in the Delaware Basin for the rest of the year, increasing its estimated production capacity to 13,000 boe/d by the end of 2017.

As of March 31, 2017, Halcón’s liquidity pro forma for its recent borrowing base redetermination was approximately $706 million, which consisted of cash on hand plus undrawn capacity on the Company’s senior secured revolving credit facility.  Halcón recently received commitments from its senior secured lenders for a $650 million borrowing base, representing an increase of $50 million versus its previous borrowing base.

During the first quarter of 2017, Halcón incurred capital costs of approximately $39 million on drilling and completions and $2 million on infrastructure, seismic and other costs.  Halcón also incurred $722 million on leasing and acquisitions, comprised primarily of its Pecos County acquisition in the Delaware Basin.

The company announced plans to release its second quarter 2017 financial results on Wednesday, August 2, 2017 after trading closes on the New York Stock Exchange.

Oil and gas prices are extremely volatile and could impact the company’s performance;

The reduction of debt could give the company more financial flexibility in the operation of its existing assets;

The easing, or tightening of Federal Regulations could impact the company’s operations;

The recent developments could be a primer for a company sale; 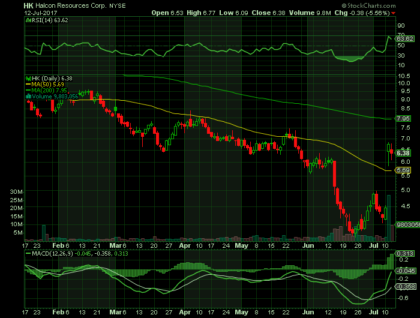 The influx of cash, and resulting reduction in debt should make HK look more attractive. CEO Floyd Wilson may believe that concentrating on the Permian Basin will enable the sale of Halcón at a higher share price. He sold another company, previously, named Petrohawk Energy, to BHP Billiton Limited BHP for $12.1 billion, reflecting a 65% premium over the share price.