Mylan N.V. (NASDAQ: MYL) is a global pharmaceutical company. The company develops, licenses, manufactures, markets, and distributes generic, brand name, and over-the-counter products. Mylan is known for its strength in the generic pharmaceutical industry. Overall, the company’s product portfolio consists of more than 7,500 marketed products sold in 165 countries and territories.

Although Mylan’s corporate seat is located in Amsterdam, the company’s global headquarters is located in Canonsburg, Pennsylvania.

As noted above, Mylan is a significant player in the generic pharmaceutical industry. As shown below, the company derives a significant portion of revenues from generics, although we note that recent acquisitions have helped to diversify its revenue base: 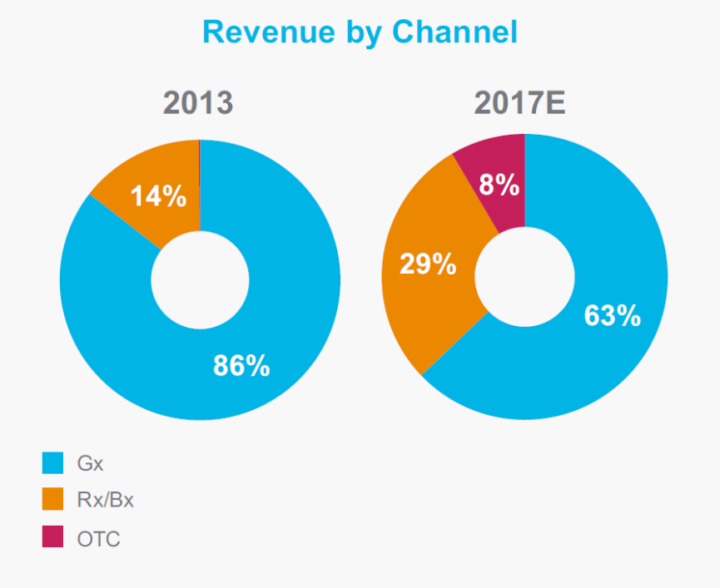 Mylan is organized into three geographic segments: (1) North America, which consists primarily of operations in the U.S. and Canada, (2) Europe, consisting of 35 countries in the region, and (3) Rest of World, which consists primarily of operations in India, Australia, Japan, and New Zealand. Revenue for the year ended December 31, 2017, is estimated as follows: 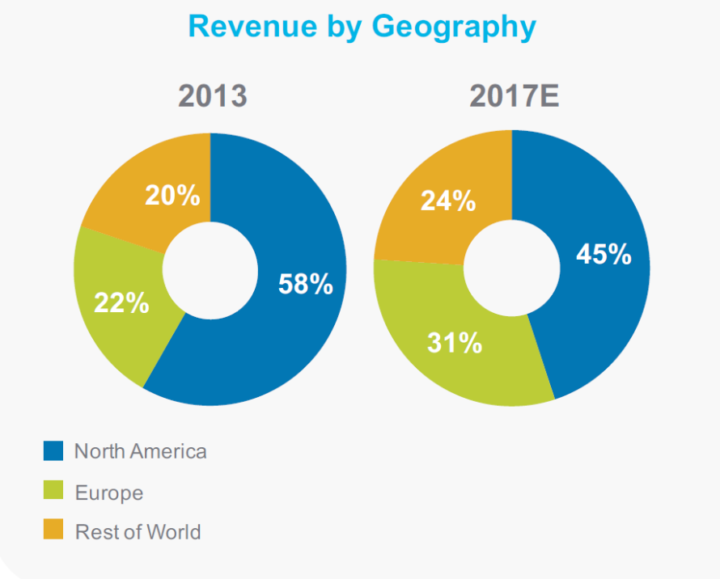 North America: The U.S. generics market is the largest in the world, with annual sales of $59 billion in 2016. The company has a strong foothold in this market, as one out of every 13 prescriptions dispensed is a Mylan product.

Among generic pharmaceutical companies, Mylan has one of the largest product portfolios. This includes 25 branded and generic topical products, an active pipeline with an additional 25 topical products, and an established U.S. sales infrastructure targeting dermatologists. Mylan also manufactures and distributes a variety of injectable products across therapeutic areas such as allergies, infectious diseases, cardiovascular, oncology, and anesthesia.

One of Mylan’s best-known products is the EpiPen Auto-Injector which has been used for the treatment of severe allergic reactions since the mid-1980s. The company holds worldwide rights to the EpiPen, which is supplied by a subsidiary of Pfizer.

Europe: Generic prescription penetration in Europe varies significantly by country. Germany, the U.K., and the Netherlands have relatively high penetration (approximately 70 percent), while other European markets such as France, Italy, and Spain are characterized by generic prescription penetration ranging from 20 to 45 percent. However, the company notes that actions taken by governments to reduce healthcare costs could help expand the use of generic pharmaceutical products.

Rest of World: The Indian generics market is one of the largest in the world, and Mylan is one of the largest active pharmaceutical ingredient (API) manufacturers in the country. The company also has several research & development sites located there. The primary areas of focus include critical care, hepato care, HIV care, onco care, and Women’s care. As noted above, Mylan also has significant operations and market share in Australia, Japan, New Zealand, and Brazil.

On October 4, the FDA approved Mylan’s generic version of Copaxone (Glatiramer Acetate Injection), a multiple sclerosis (MS) drug made by Israel’s Teva Pharmaceutical. Copaxone is the most prescribed MS treatment in the United States with brand sales of $700 million for the 20mg dose and $3.6 billion for the 40mg dose.  The company received approval for both 20mg and 40mg doses of the drug, and may be eligible for 180 days of exclusivity.

While Sandoz and Momenta Pharmaceuticals already sell a 20mg generic version of the drug, the larger market opportunity is the 40mg dosage. Analysts from Wells Fargo estimated that Mylan could capture 40 percent of the 40mg market and generate an additional $172 million in quarterly sales. Assuming the company receives 180 days of exclusivity, the new drug could add 13 cents per share to quarterly earnings.

The recent approval of generic Copaxone was prompted by the FDA announcing that it would be introducing measures to approve generic versions of complex drugs more quickly to combat rising drug prices. While this could affect sales of Mylan’s own branded EpiPen, the company will benefit from more expeditious approvals of other generic products. In addition to generic Copaxone, the company is hoping to launch a generic version of GlaxoSmithKline’s Advair asthma treatment.

Mylan is also waiting on an FDA decision (expected October 9, 2017) on MYL-1401H, a proposed biosimilar to Neulasta, which is used to treat neutropenia in adult patients undergoing chemotherapy.

After reporting second quarter results, the company revised earnings guidance downward (because weakness in North America) and delayed the expected launch dates of the generic versions of Copaxone and Advair. Given recent events, the company may adjust guidance upward after the third quarter. 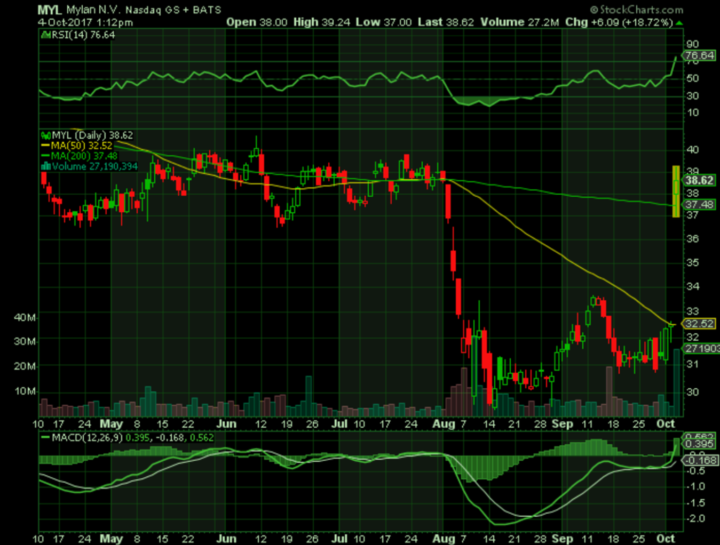 On October 4, 2017, shares of Mylan opened 17 percent higher and traded at $38.51 intraday, yielding a market capitalization of approximately $17.5 billion. The shares declined prior to second quarter results, and fell further afterward. The stock has since recovered most of those losses and is trading at approximately the same level as it was one year ago. Still, this is well below the high of $45.87 reached in March.

The recent announcement from the FDA regarding new measures to expedite approval of generic drugs is a boon for Mylan overall. The launch of generic Copaxone should be immediately accretive to earnings, and the prospect of generic Advair provides further upside potential. The primary concerns are falling sales of the EpiPen and the erosion of generic drug prices.